She developed an interest in the diseases of children and in the needs of those said to be 'ineducable' In the case of the latter she argued for the development of training for teachers along Froebelian lines (she also drew on Rousseau and Pestalozzi) and developed the principle that was also to inform her general educational programme: first the education of the senses, then the education of the intellect.

She sought to teach skills not by having children repeatedly try it, but by developing exercises that prepare them. These exercises would then be repeated: Looking becomes reading; touching becomes writing.

The success of her Montessori Method then caused her to ask questions of 'normal' education and the ways in which failed children. Maria Montessori had the chance to test her programme and ideas with the establishment of the first Casa dei Bambini (Children's house or household) in Rome in 1907.

This house, and those that followed, were designed to provide a good environment in which children could live and learn. An emphasis was placed on self-determination and self-realisation. This entailed developing discipline and a concern for others.

To this end, children engaged in ‘exercices de la vie pratique’ (exercises in daily living). These and other activities were to function like a ladder - allowing the child to pick up the challenge and to judge their progress.

This connected with a further element in the Montessori programme - decentering the teacher. The teacher was the 'keeper' of the environment. While children got on with their activities the task was to observe and to intervene from the periphery.

The focus on self-realisation through independent activity, the concern with attitude, and the focus on the educator as the keeper of the environment (and making use of their scientific powers of observation and reflection) - all have some echo in the work of informal educators. However, it is Maria Montessori's notion of the Children's House, as a stimulating environment in which participants can learn to take responsibility that has a particular resonance.

At the Leicester Montessori School, Dr. Montessori's ideas have been extended to the teaching of our students, from our nurseries to preparatory teachings and in particular used to enhance the delivery of GCSE and A Level material in the context of the National Curriculum.

It has been found that the added rigidity of a syllabus-based course of study is crucially enhanced by the added comfort gleaned imparting a deep appreciation of the context of GCSE subjects and from confident and appropriate subject choices at A Level, by which time students are encouraged to explore extra study beyond traditional school hours, and, by such techniques, encouraged to form a personal interest in one or more subjects, beyond that which results from orthodox study. 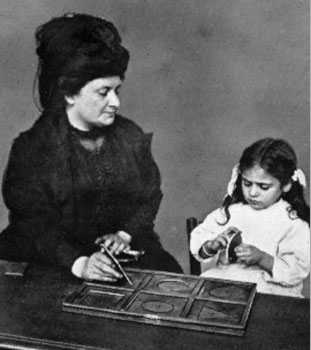